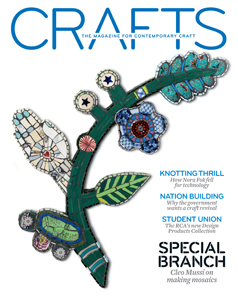 Isabelle Busnel
I am a jewellery designer-maker based in London. I graduated with an MA by Project in 2010 after completing an HND in Jewellery Design at Sir John Cass School of Art and Design, London Metropolitan University. I used to be a banker in a previous life, but that is a long story… I am French and this explains why my English is sometimes clumsy. I apologise for that and I hope that readers will get used to it and might be kind enough to find it a little bit exotic… This blog is not about my work. It is about everything that inspires me and makes me think. However it focuses on discourses, theories, ideas, concepts and works related to Applied Arts and Contemporary Craft. Boundaries are blurred enough to let me wander through the numerous Art or Design disciplines but my starting point will always remain the thinking process that operates when making things. “Whisper this quietly, but craft ... it’s quite cool you know. For so long regarded as the poor relation to both industrial design and fine art, the value of things that have been made by hand is being radically reassessed”. Grant Gibson, Editor of Crafts Magazine. Contact : busnelisabelle@gmail.com